I recently pointed out that many central bankers actually did not understand banks’ internal mechanics. We now have further evidence. In an FT Alphaville blog post, Matthew Klein quoted a recent report from the Reserve Bank of Australia, which usefully compared banking metrics across countries. 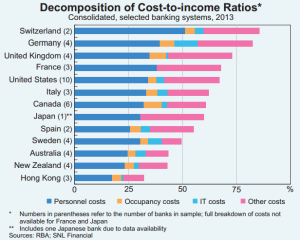 Indeed, as the following chart demonstrates, Australian banks do generate a larger share of their revenues from net interest income than banks in other countries. MCK concludes:

In other words, the more a bank focuses on taking in deposits and making loans to households and businesses, the cheaper it is to run and the less money its employees make.

And he then quotes the Australian central bank:

The Australian major banks’ focus on commercial banking – that is, lending to households and businesses – appears to be a contributor to their relatively low CI ratio. In 2013, those large banks that earned a greater share of their income from net interest income (a proxy for a bank’s focus on lending activities) tended to have lower CI ratios than ‘universal’ banks, which earned a larger share of their income through non-interest sources such as investment banking or wealth management.

The above analysis suggests that there may be diseconomies of scope for some large banks – that is, average costs increase as they diversify outside of commercial banking services. This is consistent with some literature which points to negative returns to scope when banks move into market-based activities. While market-based activities can provide a more diversified revenue stream for banks, they are typically a more volatile source of income and can expose banks to additional risks and complexity.

As simple as that.

But… wait. Are things really that simple?

Let’s take a look at some of the largest banks’ reported segmental cost/income ratios in 2013*. The segments in bold are the ones that include ‘simple’ retail banking:

It is really not clear that straightforward retail banking boasts low cost/incomes. And if one thing is clear, it is that, even in their retail banking divisions, banks in Europe do not boast the same sort of cost/income as in Australia, far from that. Around 20 percentage points higher in fact. Small, retail-only, European banks’ cost/income ratios also reach the 60 to 75% level.

Perhaps the complexity/simple story isn’t that straightforward after all.

While it is true that investment banking, in theory, can lead to higher cost/income ratios (as can private banking), and that banking systems that rely on such activities inherently have bigger cost bases, this does not mean that those banking systems are necessarily unprofitable. Switzerland for instance has a very large number of private banks. The private banking business model leads to high level of costs… and low level of risk. In a bank’s income statement, loan impairment charges follow operating costs. A bank whose asset quality is low needs the financial flexibility to absorb losses on its loan portfolio. Hence the importance of a low cost/income. Many emerging markets banks indeed have low cost/income ratios.

That was the first point: cost/income by itself doesn’t mean much.

Second point is… by focusing on the cost side of the equation, both MCK and the Australian central bankers forgot the income side.

The income side comprises net interest income. This net interest income is partly dependent on the level of interest rates. When rates are set at a low level by central banks, margin compression appears. I have already described this phenomenon here. Unfortunately this concept seems to be foreign to most people.

Banks in the UK and Europe have been suffering from margin compression for many years, as interest rates have dropped near their zero lower bound, leading lending rates to fall while (deposit) funding rates were already stuck at the bottom. Many banks in the UK and the Eurozone now only have net interest margins of 1% or less. When margins are low, net interest income suffers and accounts for a lower share of total income.

What happened in Australia in the meantime? Well, interest rates are now at a record low of…2.5%. What are banks’ net interest margins? 2% to 2.25%… Given how strong those margins are, it is natural that Australian banks will also boast higher net interest incomes, and in turn higher incomes and lower cost/income ratios…

We now have a more comprehensive answer than the ‘simple’ (if not simplistic) explanation offered in this FT Alphaville column: low rates are partly responsible for European and American banks’ high cost/income ratio. ‘Complexity’, on the other hand, is an easy and convenient target for regulators. It fits the story they’ve been trying to sell since the crisis. Facts, unfortunately, are a little more stubborn.

* Segments aren’t fully comparable. Some include corporate/SME lending or wealth management, others not. Some one-offs could distort some of the figures somewhat. I didn’t correct for that. Some banks already exclude them from their reported segmental cost/income or include them in ‘non-core’ or ‘non-strategic’ units.