Markets are drying out

Some time ago I wrote a blog post highlighting the negative effects of the new banking regulatory framework on financial markets liquidity. Since then, concerns have grown.

Here’s a patchwork of a few of the articles published on the topic over the past few weeks (mostly from the FT).

This article demonstrates the extent of the decline in liquidity in both corporate and Treasury markets: 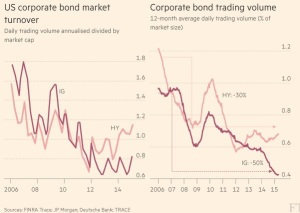 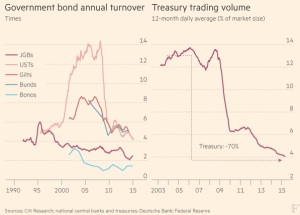 Here the author points out that the next crisis might have a “paradoxical cause” by forcing financial institutions to purchase the sort of assets that regulators deem safe. The consequence of this being that

corralling a huge amount of capital into a narrow band of the market drives prices to perilous highs. Even if these assets were safe to start with, the enforced concentration is enough to make them risky.

But central banks are making the situation worse with their QE programmes:

At the same time as regulated companies are being forced to buy these “safe” assets, then monetary authorities have been taking away large swaths of supply.

This is spot on. I keep reemphasizing this point too. And the author to brilliantly conclude:

In the popular narrative, the financial crisis was caused by the wilful wrongdoing of the banks. Regulators should know better. In financial markets, risky behaviour is less often born of recklessness than of a false sense of safety.

In this article, Blackrock’s chief investment strategist estimates that, as QE reduces the supply of bonds in the market and replaces it with cash, life insurers and FX reserve funds need an additional $3.5tr more each year to reinvest the proceeds of their maturing bonds and pension funds have an extra $500bn to reinvest every year. Compare this with QE reducing the supply of safe assets, which should decline by $300Bn this year. In the end, the shortage of high-quality liquid assets is estimated at $3.3tr. No wonder a number of assets are trading at negative yields. And this excludes the reinvestment needs of mutual funds (which have $50tr of assets under management) and banks’ regulatory needs…

Despite those facts (mostly coming from practitionners), there are a number of dissenting voices, such as Matt Levine (here on Bloomberg). His reasoning is a bit sloppy. According to him, because dealers would not be buying bonds all the way down during a crash anyway, at least now investors know that there is a risk involved in trading. But this isn’t the issue. The issue here is that we have created more risks to both investors and dealers by amplifying price swings. Investors already know that in a crash, their assets holdings’ valuation is going to decline, dealers dampening the crash to an extent or not. Should we also make cars less safe than they have become through natural manufacturing progress in order to make sure that drivers are careful on the road? While the illusion of safety (or artificial safety) is a bad thing, the artificial amplification of risk also is.

The same sort of logic has been applied by regulators and central bankers (such as Mark Carney) who keep denying that regulation or central banks policies have had anything to do with the current liquidity drought. On the contrary, they warn that it was the pre-crisis period that reflected artificial liquidity!

Same thing here, in an article that completely misses the wider picture. The author retains some of Matt Levine’s arguments (dealers wouldn’t buy all the way down), but also criticises investors for taking too much risk that they “do not understand”. Right. Perhaps making a link to banking regulation, interest rates, QE and shortage of safe assets would allow the author to understand that the search for yield and the artificially high prices of some assets do not come out of nowhere. Investors aren’t that ignorant Mr. Mackintosh. They prove it every week by writing articles warning about those exact risks in your own newspaper. I can send you the links.

Update: Reuters reports that a recent finance industry conference in London pointed out that the situation is going to get worse over the next few years. The audience of the panel reached 200 people, twice as much as for any other panel, highlighting how concerned market actors are.