Most of you already know the trouble Greece is in. What’s interesting is that, what’s happening to its banking system seems to not really reflect the view of some endogenous money theorists…

As Tim Worstall points out on the ASI blog, if banks really were able to create money out of thin air, the Greek banking system would have no reason to be on the brink of collapse for liquidity reasons (I won’t be mentioning insolvency risks here). Worstall’s blog post is admittedly overly-simplistic: while modern monetary theory (MMT) does believe in endogenous outside money creation, it remains more realistic and plausible than some of the alternative endogenous theories such as that of the authors of the BoE research paper I challenged a few weeks ago, and which I believe Worstall was in fact targeting.

The bank therefore creates its own funding, deposits, in the act of lending, in a transaction that involves no intermediation whatsoever.

Well, the fact that Greek banks had to close for a whole week to prevent liquidity shortage seems to me to say a lot about their ability to create their own funding… See below a chart from the WSJ that clearly invalidates this view. As deposits are taken out of the system (= reserves withdrawal), Greek banks have had to replace the funding loss with central bank borrowing in order to remain liquid:

But in the case of Greece, even the supply side assumption is under pressure: under the ELA programme, the ECB is only willing to provide limited liquidity to Greek banks, and against good quality collateral.

But that’s not it. Some Bundesbank staff members also just published a new research paper titled Securities trading by banks and credit supply: micro-evidence, which attempted to understand the implications of variations in trading activity on the supply of credit to the economy. In theory (simplified loanable funds model), banks have only one resource pool (= reserves) to use on two possible options: lending to customers or buying securities*. In a world of scarce resources, increasing one should decrease the second. However, endogenous money theorists would say that this dichotomy is a myth; that banks are not constrained by the availability of reserves and hence can expand both activities at the same time as long as it makes economic sense. According to them, the only real constraints on banks are regulatory ones such as minimum capital requirements.

What did the researchers find? (my emphasis)

We find that banks with higher trading expertise increase their overall investments in securities during a crisis, especially in securities that had a larger drop in price. Furthermore, this effect is more pronounced for banks with a higher level of capital and in lower-rated and long-term securities. In fact, we do not find significant differential effects for triple-A rated securities. Interestingly, the overall ex-post returns are about 12.5% for trading-expertise banks in the crisis. In contrast to behavior in securities markets, banks with higher trading expertise reduce their overall supply of credit in crisis times. The estimated magnitude of decrease in lending is approximately five percentage points. The reduction in credit supply is more pronounced for trading banks with higher capital. We also find that the credit reduction is binding at the firm level. Given that credit from banks with trading expertise constitutes a large fraction of overall credit in Germany, and that Germany is a bank-dominated economy, the results suggest that this could have a significant impact on the availability of credit to firms during the crisis at the macro level. 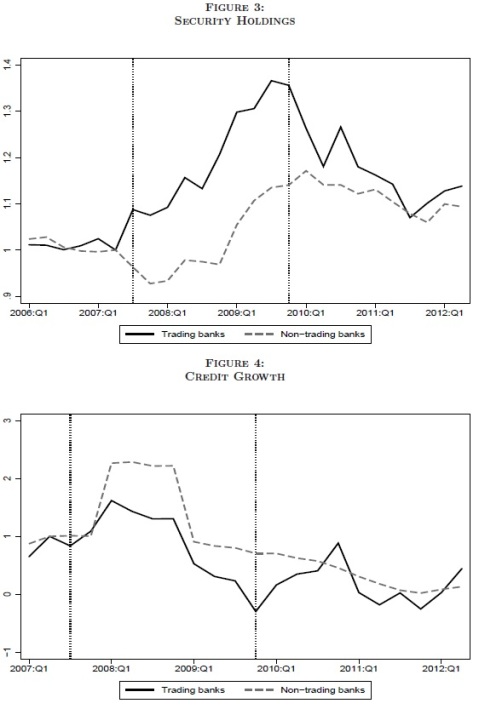 In short, the paper found that increased securities trading crowded-out lending in crisis time, despite banks not being constrained by regulatory capitalisation. While the paper is unclear about the effect of trading in non-crisis time given the much smaller fluctuations in volume, and while it doesn’t fully invalidate the MMT and other endogenous views, the results are definitely interesting and seem to provide empirical validity to the traditional loanable funds model.

*Of course, it’s not that simple and banks can indeed create claims on base money/reserves that are themselves used as money. But they are constrained by the availability of base money to do so. See my multiple posts on the topic.

Update 1: The fact that the ECB is not willing to provide an infinite amount of reserves to Greek banks may not be such a challenge to the MMT version of the endogenous theory framework after all. The collateral that Greek banks can provide mostly comprises Greek government bonds, which are ‘barely’ acceptable as collateral under ECB rules. I am not an MMT expert (only know their banking theory), but they seemed to indicate that sovereign indebtedness wasn’t such an issue. So the EU/ECB institutional framework and rulebook may not be a real challenge to the MMT banking theory, but I would qualify it as a potential ‘weakness’ (which needs more analysis).

Update 2: MC Klein has an interesting post on the FT Alphaville blog. He points out that a number of Greek banks were given a clean bill of health during last October’s EU stress tests and so solvency shouldn’t be an issue, at least according to the EU. However, Draghi doesn’t seem to honour his ‘whatever it takes’ promise, despite the supposed health of Greek banks. So in the end, the potential ‘weakness’ I mentioned above may well be more challenging than that for the MMT version of the endogenous money theory.

Update 3: Also see this chart from this speech from Lowe, Deputy Governor of the Reserve Bank of Australia, and notice how funding types growth offset each other.