Bank regulators are confused by their own mess

Regulators are getting confused by their own reform package. After years of promoting contingent convertible bonds (CoCos) as a good alternative to pure equity capital, and basing a number of their regulatory changes on them, they are now backtracking, as the FT reports (at least in the case of the ECB):

Cocos are a key pillar in the regulatory regime drawn up to strengthen banks’ capital levels and prevent taxpayer bailouts after the financial crisis. But while they are supposed to increase financial stability, concerns about them helped whip up market volatility in February.

Senior executives at several large banks have told officials at the [Single Supervisory Mechanism] that the rules for cocos are too complicated and they could undermine a bank’s financial position rather than strengthen it in a crisis.

CoCos are a form of hybrid debt that converts into equity when a bank’s regulatory capital ratio falls below a certain threshold. They are currently accounted for as ‘Tier 1 capital’. On paper, they sound quite straightforward.

In reality, they are quite opaque. Nobody really knows how to accurately value them. They have both equity and debt-like properties: cash flows are less recurring than debt but more than equity. Nobody really knows how those instruments will fare from a legal point of view when a firm goes into administration. Regulation in some jurisdictions also prevent coupon payments in some unclear cases, even when the bank isn’t about to fall into bankruptcy.

The market has boomed over the past few years as rates on offer looked attractive in a low interest rate environment that pushed many investors to search for yield. CoCos, apparently safer than stocks, seemed to be the easy choice. Some commentators started to worry that interest rates on new issues were way too low for an equity-like instrument (yields fell to about 6% and remained there since 2013, see The Economist chart below, whereas the required return on equity is usually estimated around 11 or 12%). And indeed, CoCos’ valuations suffered during the bank sell-off earlier this year as investors suddenly woke up to the fact that they actually didn’t fully understand those instruments. This CoCo sell-off actually endangered the stability of the banking system, at odds with regulators’ original aim. 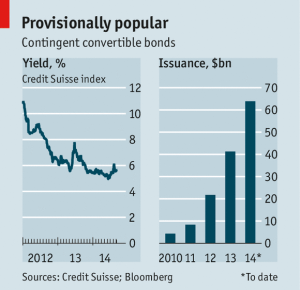 Regulators are also backtracking on capital requirements, as they see how damaging they are for smaller banks. Reuters report:

The European Union will propose changing the bloc’s rules on bank capital requirements to ease the burden on smaller lenders in a bid to boost growth, EU financial services chief Jonathan Hill said on Thursday.

In a speech in Amsterdam where EU finance ministers are meeting, Hill said he wants to lighten reporting and disclosure requirements for smaller banks.

“I also want to see whether the intricate calculations banks have to do to comply with prudential rules could be simplified. And whether there is a case for small banks with limited trading activities to be exempt from capital requirements for trading book exposures,” Hill said.

Hill’s speech underscored the willingness of the EU to deviate from globally-agreed capital norms to encourage more banks to lend more.

What the EU is proposing to create is a multi-speed regulatory framework. And we know how damaging multi-speed systems are: firms and individuals engage in regulatory engineering or even stop or reduce their activities in order not to move into the next, more burdensome and constraining, bucket, as this could imply larger additional marginal costs than marginal revenues.

We all know that small banks suffer from those misguided regulatory packages that Basel 3/Dodd-Frank/CRD 4 are, but the best solution is to repeal them for all banks, not create a multi-speed system and introduce further distortions and regime uncertainty that paralyse lending and prevent economic recovery. We’ve had enough of this mess.

PS: Bloomberg reports that Credit Suisse is looking to issue a new type of fixed income instrument that would cover potential operational losses due to rogue trading, fraud or cybercrime, in cooperation with the Zurich Insurance group. As Bloomberg says:

Regulators require banks to hold funds as a safeguard against various kinds of vulnerability, leaving them with less money to build the business.

Here again this potentially difficult to value instrument emerges from the willingness to offset the often unnecessary costs of capital regulation. But it doesn’t take a genius to figure out that those ‘solutions’ create problems of their own.

Update: Regulators are also about to introduce a new capital requirement for interest rate risk, which is likely to seriously weigh on banks’ profitability. It is funny that central bankers, who ow also often are regulators, decide to boost the economy by pushing rates down as much as possible, but then penalise banks for the same reason. Such incoherence is not going to help lending volumes, I’m telling you.