I’ve been busy and away recently so not many updates. But I’ve also read quite a few recently published research papers on banking and thought I should mention two in particular, both by BIS researchers.

The first, by Illes, Lombardi and Mizen, titled Why did bank lending rates diverge from policy rates after the financial crisis, is directly reminiscent of my posts on banks’ margin compression due to the low interest rate environment. This paper is quite interesting, in particular for the data it gathered. But, it misses the main point.

Here are some of the charts they provide, which are very similar to my own, and clearly highlights how rates did not (actually could not) follow central banks’ base rates: 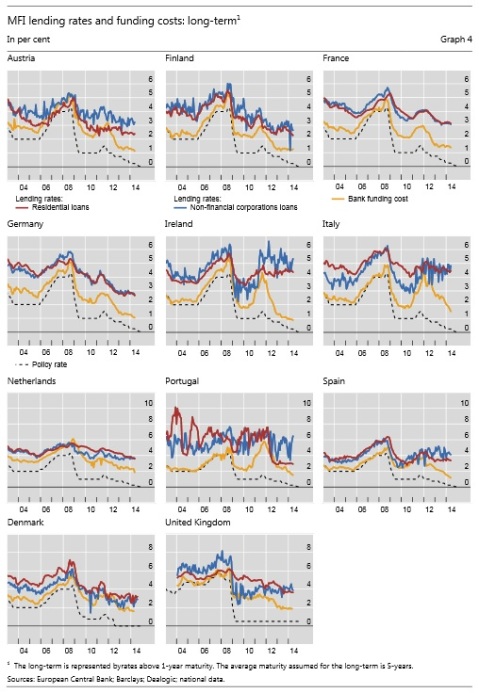 There are three reasons why bank lending rates do not reflect the behaviour of policy rates in the post crisis period. First, the policy rate is a very short-term rate, while the lending rates to business and households normally reflect longer-term loans. The spread between the lending and policy rates therefore reflects the maturity risk premium alongside other factors that determine the transmission of policy to lending rates. Second, even if we correct for the maturity risk premium using an appropriately adjusted swap rate, the adjusted policy rate is not the marginal cost of funds for banks. Third, banks obtain funds from a variety of sources including retail deposits, senior unsecured or covered bond markets and the interbank market, and these differ in nature from policy rates since they comprise a range of liabilities of differing maturities and risk characteristics

This is very true but misses the fact that margin compression remains the main factor in the breakdown of the monetary policy transmission mechanism. However, they did come close to acknowledging this fact. They built a weighted average cost of liabilities (WACL), representing the funding cost of the banking system across all funding sources (deposits, secured/unsecured wholesale funding, central bank funding). Which provides some interesting breakdowns of European banks’ funding structure as you see below (and notice how central bank funding only represents a small share of liabilities): 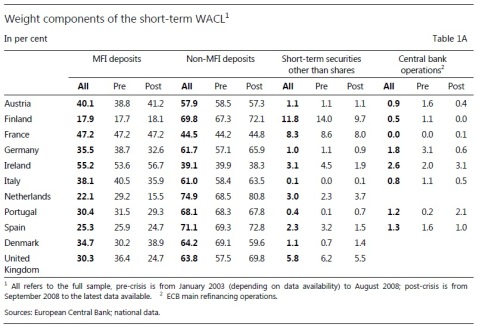 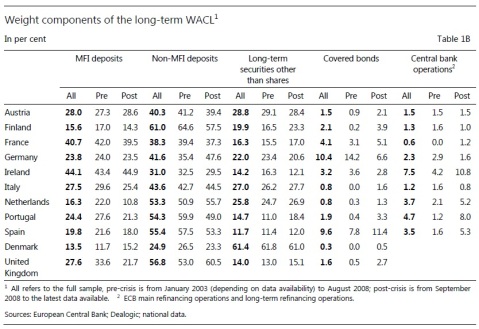 there is stronger evidence for a stable relationship between lending rate and the WACL measures we use to reflect funding costs of banks. We conclude that banks do not appear to have fundamentally changed their pricing behaviour in the post-crisis period even though bank lending surveys indicate that their credit standards have tightened since the financial crisis.

Banks’ demand deposits indeed reach the zero lower bound first, strongly reducing banks’ ability to further reduce their average costs of funds*. If lending rates had a strict relationship with funding costs, they would then stop falling at this point. Problem: a number of legacy variable rate loans (originated before rates started to fall) are calculated as central bank base rate + spread or LIBOR + spread, which continue to fall. This compresses banks’ margins, in turn endangering their profitability (you need to make revenues to pay for your non-interest operating costs…). Banks have no choice but to progressively increase the spread in variable rate loans (on new lending, and, if possible, on legacy lending). Risk premia (to cover for the cost of risk) and other factors as described by this paper are to be added on top of this compression phenomenon**.

They end their paper on a very appropriate question:

Further issues for research remain, including the question whether the effectiveness of the monetary policy transmission mechanism has been compromised by the breakdown in the relationship between policy rates and lending rates. Changes to policy rates may fulfil the Taylor principle, but retail rates may not adjust by a corresponding degree (see Kwapil and Sharler, 2010). This issue involves analysis of the relationships between policy rates, weighted average cost of liabilities and lending rates, as well as lending volumes, which we leave for further analysis

I’d add that actually, lowering the rates below a certain threshold harms banks and lending rather than helps…

*A fact acknowledged by this piece of research, even though they did not dig a little deeper into the accounting ramifications:

“In addition, deposit rates, which would normally be marked down along with the policy rates, have been constrained by the zero lower bound, which forced banks to reduce the mark-downs”

**To be clear, when funding cost does not fall as much as central bank’s base rates, it’s often the case that compression has been achieved (i.e. liabilities have reached the zero-lower bound, or close). When funding costs do fall (almost) as much as base rates, but the spread between lending rates and funding costs is widening, it often means that the risk premium is increasing (such as in Spain, Ireland or Italy).

One response to “Research review (1/2): lending rates and monetary policy”