A couple of days ago I said I had a second paper to review (yes I originally said ‘tomorrow’, but circumstances changed, sorry about that). This paper by McDonald was published last month by the BIS under the title When is macroprudential policy effective? (also available on SSRN here.) I didn’t find it very convincing.

The author runs correlations between the implementation of macro-prudential policy measures and when in the housing cycle those measures occur:

One of the aims of this paper is to determine if loosening measures are ineffective because they are often implemented during downturns. In particular, I examine whether tightening and loosening measures have the same effect once you control for where in the cycle changes are made.

This is a laudable goal but the study doesn’t seem to actually do this. Indeed, the author concludes that (my emphasis):

This is not what I see from his dataset. It seems to me that, if house price to income ratios start falling after a macro-prudential tool is put in place, it is simply because the housing market is reaching its peak. Moreover, this effect only occurs from time to time. See the charts below. Red dots represent tightening macro-prudential measures. In the four housing markets considered, only a few red dots were followed by declining house price to income ratios. Many others were actually followed by…a house market boom. And the cyclical nature of the housing market does not seem to rely on an external regulator fixing macro-prudential thresholds. Prices fall by themselves…when they start getting too expensive. 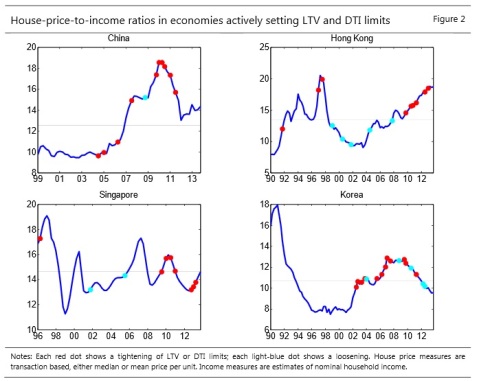 Same thing for other markets (fewer data points though): 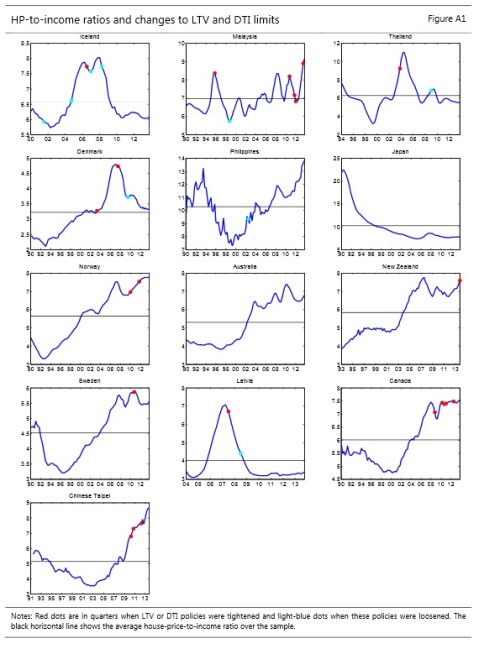 From those datasets it is clear that the correlation between tightened macropru ratios and constraining effects on housing markets is weak.

Even on aggregate, the author’s own chart doesn’t seem to match his claims: 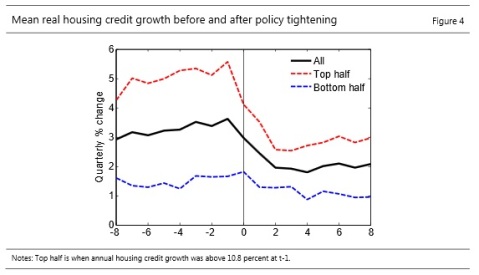 A second study (The Use and Effectiveness of Macroprudential Policies: New Evidence) by Cerutti, Claessens and Laeven, published by the IMF last month as well, partly reflects what Aiyar, Calomiris and Wieladek had said in a past paper: macro-prudential policies leak. While both papers found some reduction in credit growth following the introduction of a macropru tool, they also noticed a tendency of market actors to take avoidance measures: the previous paper noticed a parallel growth in shadow banking, and the new IMF paper noticed increased cross-border lending growth.

Their conclusion clearly does not support regulators’ and central bankers’ hopes that macro-prudential policies could help offset the negative effects of low interest rates on some asset markets*:

We find that policies are generally associated with reductions in the growth rate in credit, with a weaker association in more developed and more financially open economies, and can have some impact on growth in house prices. We also show that using policies can be associated with relatively greater cross-border borrowing, suggesting countries face issues of avoidance. We do find evidence of some asymmetric impacts in that policies work better in the boom than in the bust phase of a financial cycle.

It seems to me that many researchers and regulators are currently trying to convince themselves that macro-prudential measures work. If only their own datasets could back up their (albeit moderate) conclusions.

* However, just following this quote, they do add that “taken together, the results suggest that macroprudential policies can have a significant effect on credit developments.” Which is pretty much the opposite of what they conclude from the data they process…