Leveraged housing bubbles are the most damaging ones

Jordà and his colleagues are quickly becoming some of my favourite economic researchers. Not because we necessarily share the same fundamental economic believes (probably not, at least to my knowledge) but because they keep publishing remarkable pieces of financial data gathering.

In their most recent publication, titled Leveraged Bubbles, they reached a conclusion that could sound relatively obvious to most people versed in Austrian or Minskyite business cycle theories, namely that

what makes some bubbles more dangerous than others is credit. When fueled by credit booms asset price bubbles increase financial crisis risks; upon collapse they tend to be followed by deeper recessions and slower recoveries. Credit-financed house price bubbles have emerged as a particularly dangerous phenomenon.

But, as usual, it’s their dataset that’s the most interesting, and on which further empirical research can be based. They provide a dataset of bank credit, real estate and stock prices across 17 different countries, starting around 1870.

What do they find? That combined housing and equity bubbles leading to financial recession are a characteristic of the post-WW2 world:

Whereas equity price booms play a prominent role in those financial recessions associated with a bubble episode before WW2 (8 out of 12 bubble related financial crisis recessions involve equities alone), after WW2 it appears that most episodes involved bubbles in both equity and house prices—11 out of 21 episodes are linked to bubbles in both asset classes.

And that, this is necessarily linked to the huge mortgage lending growth of the era:

Building on the original data collected by Schularick and Taylor (2012), Jorda, Schularick and Taylor (2014) break-down bank lending into mortgage and non-mortgage lending. While both types of bank lending experienced rapid growth in the post-WW2 era, the share of mortgages relative to other types of lending grew from a low point of less than 20% in the 1920s to the nearly 60% in the Great Recession.

As I have pointed out in a review of their previous research publications, this isn’t surprising at all given that the whole Basel regulatory framework has made it much easier (and more rational) for banks to maximise their lending allocation to the real estate sector. In short, Basel has institutionalised the debt-fuelled housing bubble.

And this made the whole economy more vulnerable. They point out that housing bubbles are

considerably more damaging events. The drag on the economy is nearly twice as big when accompanied by higher than average credit growth. In terms of the path of the recession and recovery, we note that it can sink the economy for several years running so that even by year 5 the economy is still operating below the level at the start of the recession.

In other words (not theirs, but mine), Basel, by attempting to make the financial system safer, has made it (and the whole economy) weaker (and it would actually be better to live in a stock bubble-prone world). And the impact on economic growth is dramatic: 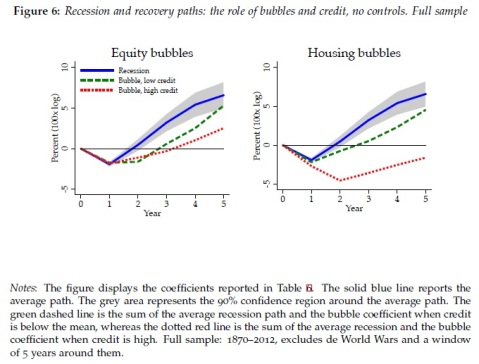 Given that housing prices have been strongly increasing again in many countries since the onset of the crisis, there is nothing reassuring in their results.

The Hayek quote I came across last week is more relevant than ever. Micromanagement of the banking system is bound to disappoint its supporters.