I have never hidden my admiration for Hayek’s work, in particular over the last few weeks. The name of this blog is itself derived from Hayek’s concept of spontaneous order. I view Mises as having laid the foundations of a lot of Hayek’s and modern Public Choice theory thinking (see Buchanan’s admission that Mises “had come closer to saying what I was trying to say than anybody else”). He was to me a more comprehensive theorist than Hayek, and made us understand through his methodological individualism method that human action was at the heart of economic behaviour. But Hayek’s brilliant contribution is to have built on Mises’ business cycle, market process and entrepreneurship insights to develop a coherent and deep philosophical, legal, political and economic paradigm. While some would argue that he didn’t push his logic far enough (see here or here), it remains that reading the whole body of Hayek’s work is truly fascinating and enlightening. It suddenly feels like everything is connected and that “it now all makes sense”.

Some of Hayek’s insights are verified on a day-to-day basis. He repeatedly emphasised that knowledge was dispersed throughout the economy and that no central authority could ever be aware of all the ‘particular circumstances of time and place’ in real time. This knowledge problem was core to his spontaneous order theory, which describes how market actors set up plans independently of each other according to their needs and coordinated through the price system and respect for the ‘meta-legal’ rules (what he later called ‘rules of just conduct’) of the rule of law. 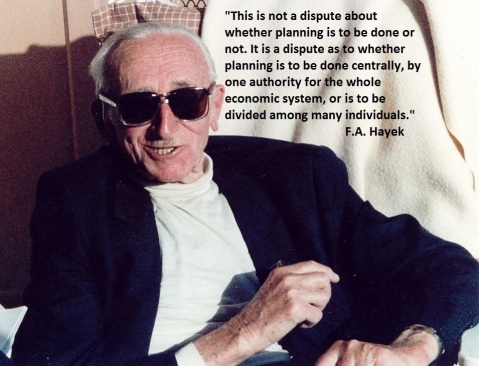 I have very recently offered a critique of macro-prudential regulation based on Hayek’s and Public Choice’s insights. But his description of the knowledge problem also applies. Zach Fox, on SNL (link gated), reports that the whole of macro-prudential regulatory framework may be useless because the US agency in charge of tracking the data can only access outdated, if not completely wrong, datasets. This agency calculates ‘systemic risk’ scores from a number of data points sent by various banks. Problem: those figures keep being revised by many banks, sometimes radically, leading to large fluctuations in ‘systemic risk’ scores and regulators keep using outdated data:

SNL has only been able to track the movements by scraping each bank’s individual filing periodically over the last year. U.S. banks filed their 2013 systemic risk reports by July 2014, at which point SNL reported on the data. After noticing some differences, SNL followed up Jan. 13, 2015. In total, 12 data points had changed across the filings for eight different banks. Then, in July 2015, SNL noticed yet more revisions to the 2013 filings.

(one could add: “and of micro-prudential supervision”)

In short, due to dispersed nature of financial knowledge (i.e. data) across the whole banking sector and the inherently bureaucratic nature of the data collection and analysis process, regulatory agencies do not have ability to collect accurate data in a timely manner, and hence act when really necessary.

Of course, some banks also seem to struggle to report the required data. But they are much closer to their own ‘particular circumstances of time and place’ and hence can take action way before the data even reach the regulator. Moreover, banks are organisations that comprise several layers of individuals, each of them facing their own particular circumstances. Knowledge is dispersed among bankers who deal with clients on a daily basis and goes up the hierarchical chain if and when necessary. Governmental agencies are at the very end of this chain and informed last, way after the actions have taken place (or the disaster occurred).

Of course, this does not mean that commercial banks are always effective in dealing with data and that all their decisions are taken rationally. But a central regulatory agency would not have the ability to make the bank safer either. Forcing banks to adopt certain standards in advance could help solve the problem to an extent only, as circumstances vary and standards may not be appropriate for all situations or could even exacerbate problems as I keep emphasising on this blog (and are likely to be a harmful and unnecessary drag on economic performance).

PS: The Chinese central bank is about to cut reserve requirements to boost lending according to the WSJ. Clearly China hasn’t been infected by the MMT/endogenous money virus yet.

Above all, however, I am bound to stress that in the course of the work on this book I have been, by the confluence of political and economic considerations, led to the firm conviction that a free economic system will never again work satisfactorily and we shall never remove its most serious defects or stop the steady growth of government, unless the monopoly of the issue of money is taken from government. I have found it necessary to develop this argument in a separate book, indeed I fear now that all the safeguards against oppression and other abuses of governmental power which the restructuring of government on the lines suggested in this volume are intended to achieve, would be of little help unless at the same time the control of government over the supply of money is removed. Since I am convinced that there are now no longer any rigid rules possible which would secure a supply of money by government by which at the same time the legitimate demands for money are satisfied and the value of that money kept stable, there appears to me to exist no other way of achieving this than to replace the present national moneys by competing different moneys offered by private enterprise, from which the public would be free to choose which serves best for their transactions.

It comes from the chapter 18 of Law, Legislation and Liberty (which I have now read), and highlights a significant evolution in Hayek’s thinking since The Constitution of Liberty, in which he had argued in favour of government managing the money supply (but should do it well of course).