There is a row over the new IFRS 9 standards. Those are new accounting rules supposed to be introduced by 2018 (outside of the US). As this FT article summarises:

Banks were unable to book accounting losses until they were incurred, even though they could see the losses coming. At times the incurred loss rule meant banks overstated profits upfront and did not make prudent provisions against expected losses, particularly in areas such as loans secured against property.

Now, as I said a few weeks ago, accounting rules seem to mostly respect the rule of law as described by Hayek, by experimenting, learning from their mistakes and evolving, step by step. The process can be slow and the experiment can turn wrong in the short run. Whether IFRS standards have respected this process is arguable.

A FT editorial declares that banks should not be able to game the rules, whatever that means. Hence it welcomes the changes. Not everyone agrees. But the FT column is contradictory. It complains that banks were “slow to react to emerging problems when the financial crisis struck” and that “they allowed outright concealment of economic realities” by shifting some assets from fair valued portfolios (i.e. marked to market) to held-to-maturity ones (i.e. reported at amortised cost). This may be right, but I’m not sure.

First, is this really ‘gaming the rules’? No, it is simply applying the rules. Second, I’ve always doubted that mark-to-market accounting really reflected the ‘fair value’ of an asset. It reflects its market price at a given time. Which isn’t the same thing. Markets panic, in particular during financial crises. This tends to temporarily amplify fluctuations in market prices. Volatility increases widely. By holding assets at fair value, you can be bankrupt on Monday and solvent on Friday. When markets have lost all notion of a fair, or equilibrium, price, it is silly to speak about banks’ assets being ‘fair valued’. This can only happen once markets have calmed down and prices only fluctuate marginally around a certain level.

Friedman and Kraus, in their great book Engineering the Financial Crisis, describe how AIG could have survived if it, counterparties and US regulators had waited a few months so that the market price of a number of its trades recovered. It could have then potentially avoided a bail-out. I don’t know the circumstances of Lehman Brothers in detail, but it is certain that its insolvency was partly triggered by short-term price fluctuations that forced short-term asset write-downs.

In fact, mark-to-market accounting can amplify recessions by making banks’ balance sheets look much worse than they really are. The result of which is that banks drastically reduce lending and lay off staff, aggravating the collapse in aggregate demand beyond what would have happened had those accounting rules not been in place. For instance, a lot of structured financial products lost half or more of their market value during the crash, but only a tiny portion actually defaulted! (see here and here) Is it worth penalising financial institutions and, in fine, the economy, for temporary changes in prices? Beware what you wish for.

Apparently, even Milton Friedman blamed mark-to-market accounting for many bank failures during the Great Depression (I don’t have an original source though; perhaps in the Monetary History of the United States, but I can’t recall).

Let’s get back to our provisioning methods. The ‘incurred loss’ model wasn’t perfect: banks under IFRS were not free to provision the amount they wanted when they wanted, the goal being to prevent bankers from ‘managing’ their profits. While this can be a laudable goal, this is also risky: as with the conflict between marked-to-market and amortised cost accounting rules described above, ‘managing’ profits can dampen economic booms and busts, at the expense of short-term financial statement reliability.

Under the new ‘expected loss’ model, banks will have to provision upfront on all loans, although only over the following 12-month period according to my understanding. It still doesn’t give banks much flexibility and only changes the timing of the provisioning. A loan becomes costlier at origination, but not over its lifetime. But as often, the comments on the two FT articles are more interesting than the article itself. And some worry that those new standards have pro-cyclical features, by statistically requiring higher level of provisioning at origination during recessions, thereby mechanically requiring more capital. Which of course would be likely to impair banks’ lending appetite when they already struggle to make decent returns on their existing capital base.

Perhaps the less economically distorting way would be to go back to pre-WW2 loan loss provisioning standards: there were apparently none. It is now well-known that 19th century and early-20th century banks used to hold a lot thicker capital buffers. 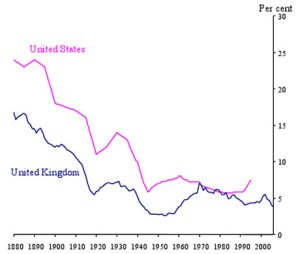 While there are many reasons why equity buffers fell (better institutional framework, better access to information, more diversified business models…), accounting standards are another reason: they progressively created loan loss reserve accounts from WW2 onwards, originally for tax reasons (see Walter here). Loan loss reserves’ purpose was to provide a buffer for expected losses, whereas equity mostly became a buffer for unexpected losses. Before that, equity was an all-purpose buffer and loans were not provisioned but directly ‘charged-off’. In the US, only 38% of banks had loan loss reserve accounts in 1948. By 1975, 94% of them did.

So to be fair with banks, the chart above should add provisioning (which is a ‘negative’ asset) to equity. A back of the envelope calculation I made some time ago seemed to show that equity/asset levels would rise by 100/300bp. Still below late 19th century levels, but not as bad as many believe. By letting bankers decide the amount of the buffer (reserves or equity) and the timing of its increase/decrease, some banks would inevitably fail, but it is also likely that, on aggregate, stability could be enhanced as pro-cyclicality is reduced.

I am not saying here that there should not be any accounting rules in place. Those would be necessary to provide investors with relatively accurate information (and there have been discussions and proposals to radically change provisioning methods. See Kerr here). But too much rigidity leading to very accurate statements at a point in time that would then be completely undermined a few months later as a crisis strikes and losses are revealed, is of limited use. And economically damaging. There might be other middle way options that I am missing, but available choices seem to me to be: point-in-time accurate and long-term inaccurate or point-in-time inaccurate and long-term accurate.

PS: See also this interesting BIS paper that reviews the literature on the relationship between accounting rules, regulation and business cycles. It takes a different view on fair value accounting and says that there is no real conclusive evidence that fire sales occurred and damaged banks’ balance sheet as a result. Maybe, but fire sales by banks don’t have to occur to make mark to market losses on assets. It also finds some pro-cyclicality due to provisioning rules, but research is preliminary and sometimes contradictory.