The ‘run on repo’ is only part of the recession story

In my latest post I wrote that the Gorton story of the Great Recession (i.e. run on repo) was at best far from comprehensive and misleading. It only applies to a small portion of the financial sector, that is a number of broker-dealers, large banks and some shadow banks that made extensive use of (mostly short-term) reverse repos as investments and repos as funding sources.

While this run did occur, saying that it was the cause of the crisis is like saying that traditional bank runs were what triggered financial crises of the past. It is inaccurate: runs are mostly symptoms, albeit symptoms that can aggravate the underlying conditions. The Gorton story hides everything else that happened before and after the onset of the crisis, and which mostly impacted smaller banks and investors that were not making extensive use of repos. While some of those failing institutions did suffer from risk-aversion in the wholesale market, threatening to make them illiquid, many deposit-funded banks did not collapse because their funding source dried up. They collapsed because their capital evaporated.

A very recent paper by Adonis Antoniades, titled Commercial Bank Failures During The Great Recession: The Real (Estate) Story, confirms this view. This is Antoniades:

The main determinants of balance sheet stress for commercial banks were much different than those for brokers-dealers. Though aggregate funding strains have been identified as one of the precipitating causes of the crisis, with a particularly pronounced impact on brokers-dealers, funding conditions alone cannot explain commercial bank failures. The FDIC reported 492 bank failures from January 1, 2005 to December 31, 2013. However, the vast majority of these failures – 462 failures – took place after the last quarter of 2008. That is, during a period when aggregate funding pressures in the banking sector had completely abated. Furthermore, throughout the financial crisis commercial banks had access to lender of last resort facilities at the Federal Reserve’s discount window.

Well, there is still a stigma associated to any central bank borrowing, but the rest of his point is valid. He provides the following US bank failures timeline:

As well as the TED spread over a long time period: 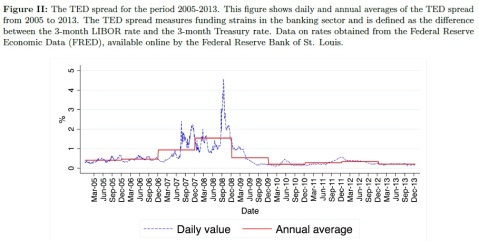 Essentially, he finds no evidence that US banks increased their exposures to traditional home mortgages or agency (i.e. Fanny and Freddy) MBS products in the few years preceding the crisis, and that this was mostly due to securitisation. But he did find that banks increased their exposure to all other real estate product categories. Overall, US banks “moved towards a more real estate-focused product mix during this period.” This is broadly consistent with Jorda et al’s research that I have mentioned here a number of times, although their research focused on aggregate real estate credit.

He then finds no or low correlation between traditional household mortgages and risk of bank failures, but significant correlation with commercial real estate lending:

The real estate risk that mattered most for bank failures was indeed primarily non-household. Neither exposure to traditional home mortgages nor to agency MBS increased the probability of failure over and above the base effect of non-real estate exposures in the illiquid assets and marketable securities portfolios, respectively. The probability of bank failure also increased with holdings of private-label MBS, but only for larger banks. Non-household real estate products – both loans and credit lines – on the other hand, enter with positive, economically and statistically significant coefficients.

It isn’t that surprising as the CRE market boomed and collapsed with greater fluctuation than the residential market (see chart below for the US). Similar patterns can be found in the UK, Spain and other countries.

He provides an explanation as to why traditional mortgage exposures still remain critical for the financial system as a whole:

The estimated coefficient for the effect of holdings of traditional home mortgages, should not be read as suggesting that there were no significant losses during the crisis stemming from exposure to this asset category. Rather, together with the earlier observations on the accumulation of real estate risk during the run-up to the crisis, these results suggest that commercial banks off-loaded part of that particular risk to other types of financial intermediaries through the securitisation channel. And, possibly, that they adequately provisioned capital for the residual risk associated with home mortgage loans retained on-balance sheet. The absence of an effect for holdings of agency MBS is likely driven by agency and (implicit) government guarantees associated with these securities, but also by the significant support that this market received through a number of Federal Reserve interventions.

Moreover, banks that increased their exposure to non-household mortgage products more rapidly than average were more likely to fail.

Finally, this chart of Antoniades’ paper demonstrates the importance of bank accounting standards. Look at the quick price fall, and then rise, of private-label MBSs. A firm with heavy exposure to this asset class would see its capital disappear almost overnight due to the rapidly collapsing prices. But wait a few months that prices recover and the same firm might well have survived. This has important consequences for financial stability, bank lending and hence money supply growth and monetary policy transmission.