The EU wants to put in place its now famous banking union. The ECB is taking over as the single regulator of all the banks of the Eurozone (and countries that wish to participate). The rationale is that the Eurozone banking system is getting ever more integrated within the ‘single market’, hence justifying having a single ruleset and a single supervisor. But is it really?

In a recent speech, Andrew Haldane pointed out that cross-border banking claims had strongly declined since the crisis: 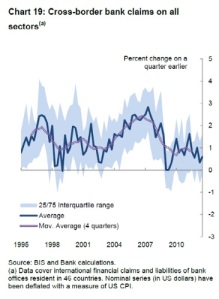 But a new paper by Bouvatier and Delatte (full version here) now provides some interesting disagregated data to this trend. Controlling for the impact of the economic and financial crisis on the integration of the banking system across Eurozone countries, they conclude that

the decline in banking activities observed after the crisis was due to temporary frictions in all countries outside the euro area. In contrast, the economic downturn faced by the euro area since 2008 is not sufficient to account for the massive retrenchement of international banking activities. Euro area banks have reduced their international exposure inside and outside the euro area to a similar extent. We also find that this decline is not a correction of previous overshooting but a marked disintegration.

According to their model, Eurozone banking integration is 37% below where it should be. So much for a banking union. On the other hand, they find that non-Eurozone banking systems have increased their claims on foreign countries. 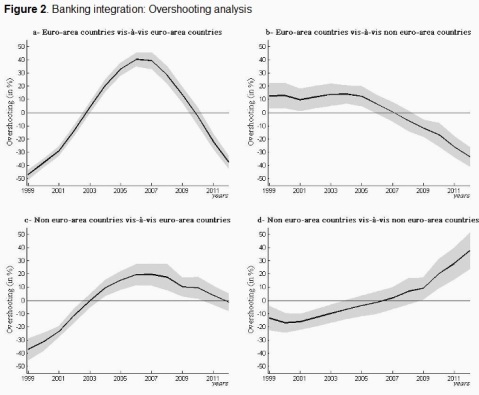 This is very interesting. However, I believe two minor issues distort some of their conclusions: 1. Their sample of banks only consider 14 OECD countries. It would have been interesting to include emerging economies. 2. Their analysis stops in 2012, which is a flaw. Since then, many non-Eurozone banks have cut in their cross-border activities as complying with the increasing regulatory burden became too onerous. I actually suspect that most banks from OECD/developed countries have started to dis-integrate, whereas banks from a number of emerging economies have actually started to grow outside of their domestic borders*.

They do not provide the reasons behind this phenomenon. However, I believe that regulatory and political pressure is the number 1 reason behind this retrenchment. In their haste to make banks safe, regulators are actually doing the exact opposite.

I have already reported on BoE research that demonstrated that global integration of banking systems led to stability of funding flows within what researchers called the ‘internal capital markets’ of banking groups (I also added several historical examples to back this research).

In global banks, internal liquidity management is a consistent driver of explaining cross-sectional differences in loan growth in response to changing liquidity risk. Those banks with higher net borrowing from affiliated entities had consistently strong loan growth (domestic, foreign, cross-border, credit) when liquidity risks increased. As shown in the last column of Table 2 Panel B, these global banks with larger unused credit commitments borrow relatively more (net) from their affiliates when liquidity conditions worsen and then sustain lending to a greater degree.

Clearly, the ability of global groups to transfer liquidity and capital across borders can play the role of risk absorber when a crisis strikes. Yet national regulators are implementing new measures that have the exact opposite effect (i.e. ring-fencing and so on). Measures that, among others, result in the disintegration of banking across the Eurozone.

Consequently, regulators’ and politicians’ enthusiasm for the banking union seems a little bit misplaced. See this recent speech by Vítor Constâncio, Vice-President of the ECB:

Another important objective of Banking Union is to overcome financial fragmentation and promote financial integration. In particular, this will constitute a key task of the Single Supervisory Mechanism.

Really? This seems to me to contradict the very actions of regulators in the EU. It can only be one way Mr. Constancio, not both ways.

Then he adds something that is, I believe, a fundamental error:

There are four ways which I expect the SSM to make a difference to banking in Europe: by improving the quality of supervision; by creating a more homogeneous application of rules and standards; by improving incentives for deeper banking integration; and by strengthening the application of macro-prudential policies.

The prudential supervision of credit institutions will be implemented in a coherent and effective manner. More specifically, the Single Rule Book and a single supervisory manual will ensure that homogeneous supervisory standards are applied to credit institutions across euro area countries. This implies that common principles and parameters will be applied to banks’ use of internal models, for example. This will improve the reliability and coherence in banks’ calculation of risk-weighted assets across the Banking Union. On another front, the harmonisation in the treatment of non-performing exposures and provisioning rules will mean that investors can directly compare balance sheets across jurisdictions.

While I believe that the single resolution mechanism can indeed be beneficial (even though it looks overly complicated and it remains to be seen how it’s going to work in practice), a single regulatory treatment of all banks across economies and jurisdictions as varied as those of the EU is mistake. Here is what I said more than a year ago about the standardisation problem:

So a standardisation seems to be a good thing as data becomes comparable. Well, it is, and it isn’t. To be fair, standardisation within a country is probably a good thing, although shareholders, investors and auditors – rather than regulators – should force management to report financial data the way they deem necessary. However, it makes a lot less sense on an international basis. Why? Countries have different cultural backgrounds and legal frameworks, meaning that certain financial ratios should not be interpreted the same way from one country to another.

Let’s take a few examples. In the US, people are much more likely than Europeans on average to walk away from their home if they can’t pay off their mortgage. Most Europeans, on the other hand, will consider mortgage repayment as priority number 1. As a result, impaired mortgage ratios could well end-up higher in the US. But US banks know that and adapt their loan loss reserves in consequence. Within Europe, legal frameworks and judiciary efficiency are also key: UK banks often set aside fewer funds against mortgage losses as the legal system allows them to foreclose and sell homes relatively quickly and with minimal losses. In France on the other hand, the process is much longer with many regulatory and legal hurdles. Consequently, UK-based mortgage banks seem to have lower loan loss reserves compared with some of their continental Europe peers. Does it mean they are riskier? Not really.

Indeed, look at the World Bank’s Doing Business data. The Economist selected a few countries below, all of them from the EU: 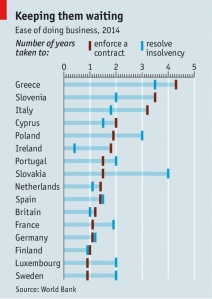 EU countries have very disparate legal frameworks and cultural backgrounds. What Constancio is saying is that the same criteria are going to be applied to all banks across all countries above. This does not make sense. The ‘single EU market’ remains for now a multiplicity of various heterogeneous markets, with their own rules, that have merely facilitated cross-border trade and labour movement.

This is a fundamental issue with the EU. Monetary and banking union should have come last, after all other laws had been harmonised. Not first. For now, EU politicians want to force a banking union on a geographical area that has limited legal and political integration. Let alone that domestic politicians and regulators are forcing their domestic banks to focus on business within their national borders, not within the EU borders.

* Indeed, another recent paper by Claessens and van Horen (summary on VOX here) suggests that

After a continued rise until 2008, the number of foreign banks from high-income countries has started to decline, from 948 in 2008 to 814 in 2013, mostly on account of a retrenchment by crisis-affected Western European banks.

On the other hand, banks from emerging markets and developing countries continued their pre-crisis growth and further increased their presence. Currently these banks own 441 foreign banks, representing 8% of all foreign assets, a doubling of their share as of 2007. As these banks tend to invest mainly in their own geographical regions, global banking now both encompasses a larger variety of players and at the same time is more regional, with the average intraregional share increasing by some five percentage points. 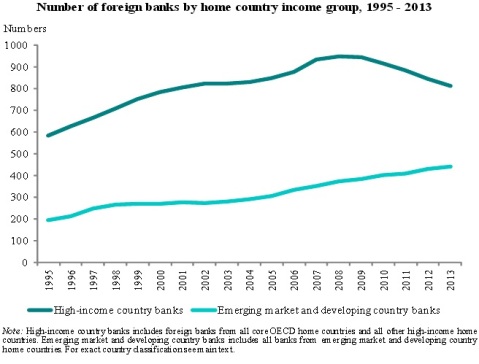