The FT reported today that house prices were booming in many different countries, in particular in Israel, Norway, Australia, Canada…

There is nothing surprising at all in what’s happening. As I have already pointed out several times, Basel regulations are still incentivising banks to channel the flow of new lending towards property-related sectors. A repeat of what happened, again and again, since the end of the 1980s, when Basel was first introduced. I cannot be 100% certain, but I think this is the first time in history that so many housing markets in so many different countries experience such coordinated waves of booms and busts.

So far we’ve had two main waves: the first one started when Basel regulations were first implemented in the second half of the 1980s. It busted in the first half of the 1990s before growing so much that it would make too much damage. The second wave started at the very end of the 1990s, this time growing more rapidly thanks to the low interest rate environment, until it reached a tragic end in 2006-2008. It now looks like the third wave has started, mostly in countries where house prices haven’t collapsed ‘too much’ during the crisis. 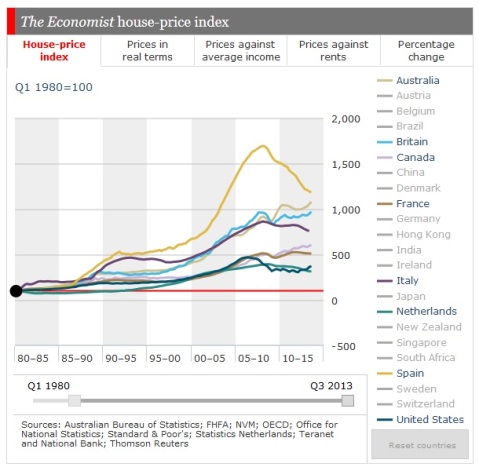 Sam Bowman was indeed right that lack of supply (through planning restrictions) is a real factor in driving up house prices in the UK. However, this cannot be the only issue at play here. A chronic lack of supply would lead to chronically increasing housing prices, not to wave-like variations, especially when those waves happen to be very well coordinated with those of other countries.

I still have to dig more in details into the data of each country, and I’ll do it in subsequent posts. For sure, some countries seemed to ‘skip’ one wave or to experience a mild one, but banking regulation is only part of the explanation. Local factors such as monetary policy, population growth, building restrictions, etc., are also important in determining local prices.

What’s interesting in the FT article is also the fact that a lot of countries have implemented macro-prudential policies over the last few years. Their effects on house bubbles seemed to have been close to nil… Indeed, low real interest rates compounded by regulatory-boosted mortgage lending supply still make housing an attractive asset class.

As long as this deadly combination remains in place, brace yourself for a recurring pattern of housing bubble cycles.