Banks’ RWAs as a source of malinvestments – A graphical experiment

Today is going to be experimental and theoretical. I have already outlined the principles behind the RWA-based variation of the Austrian Business Cycle Theory (ABCT), which was followed by a quick clarification. I am now attempting to come up with a graphical representation to illustrate its mechanism. In order to do that, I am going to use Roger Garrison’s capital structure-based macroeconomics representations used in his book Time and Money: The Macroeconomics of Capital Structure. I am not saying that what I am about to describe is 100% right. Remember that this remains an experiment that I just wrote down over those last few days and that needs a lot more development. There may well also be other ways of depicting the impacts that Basel regulation’s RWAs have on the capital structure and malinvestments. Completely different analytical frameworks might also do. Comments and suggestions are welcome.

This is what Garrison’s representation of the macroeconomics of capital structure looks like: 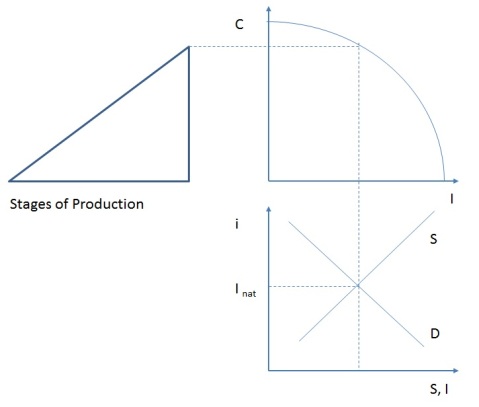 It is composed of three elements:

I don’t have time to come back to the original ABCT and those willing to find out more about it can find plenty of examples online. Today I wish only to try to understand the impact of regulatory-defined risk-weighted assets on this structure. Ironically, it becomes necessary to disaggregate the Austrian capital-based framework to understand the mechanics and distortions leading to a likely banking crisis. In everything that follows, and unlike in the original Austrian theory, we exclude central banks from the picture (i.e. no monetary injection). We instead focus only on monetary redistribution. The story outlined below does not explain the financial crisis by itself. Rather, it outlines a regulatory mechanism that exacerbated the crisis.

Let’s take a simple example that I have already used earlier. Only two types of lending exist: SME lending and mortgage/real estate lending. Basel regulations force banks to use more capital when lending to SME and as a result, bankers are incentivised to maximise ROE through artificially increasing mortgage lending and artificially restricting SME lending, as described in my first post on the topic.

In equilibrium and in a completely free-market world with no positive net investment, the economy looks like Garrison’s chart above. However, bankers don’t charge the Wicksellian natural rate of interest to all customers: they add a risk premium to the natural rate (effectively a ‘risk-free’ rate) to reflect the risk inherent to each asset class and customer. Those various rates of interest do reflect an equilibrium (‘natural’) state, which factors in the free markets’ perception of risk. Because lending to SME is riskier than mortgage lending, we end up with:

What RWAs do is to impose a certain perception of risk for accounting purposes, distorting the normal channelling of loanable funds and therefore each asset class’ respective ‘natural’ rate of interest. Unfortunately, depicting all demand and supply curves, their respective interest rates and the changes when Basel-defined RWAs are applied would be extremely messy in a single chart. We’re going to illustrate each asset class separately with their respective demand and supply curve. Let’s start with mortgage (real estate) lending:

Given the incentives they have to channel lending towards capital-optimising asset classes, bankers artificially increase the supply of loanable funds to all real estate activities, pushing the rate of interest below the natural rate of the sector. As the actual total supply of loanable funds does not change, returns on savings remain the same. In our PPF, this pushes resources towards real estate. Any other industry would interpret the lowered rate of interest as a shift in people’s intertemporal preferences towards the future and increase long-term investments at the expense of short-term production. Indeed, long-term housing projects are started. This is represented by the thin dotted red triangle.

However, the short-term housing supply is inelastic and cannot be reduced. The resulting real estate structure of production is the plain red triangle. Nonetheless, real estate developers have been tricked by the reduced interest rate and the long-term housing projects they started do not match economic agents’ future demand. Meanwhile, savers, adequately rewarded for their savings, do not draw down on them (or don’t have to), but are instead incentivised to leverage as they (indirectly) see profit opportunities from the differential between the natural and the artificially reduced rate. Leverage effectively becomes a function of the interest rate differential:

The increased leverage boosts the demand for existing real estate, bidding up prices, starting a self-reinforcing trend based on expected further price increases. We end up in a temporary situation of both short-term ‘overconsumption’ of real estate and its associated goods, and long-term overinvestments (malinvestments). This situation is depicted by the thick dotted red triangle and represents an unsustainable state beyond the PPF.

On the other hand, bankers artificially restrict the supply of loanable funds to SME, pushing the rate of interest above the natural rate. Tricked by a higher rate of interest, SMEs are led to believe that consumers now value more highly present goods over future goods (as they ‘apparently’ now save less of their income). They temporarily reduce interest rate-sensitive long-term investments to increase the production of late stages consumer goods. This results in an overproduction of consumer goods relative to economic agents’ underlying present demand. Nonetheless, wealth effects from the real estate boom temporarily boost consumption, maintaining prices level. Overconsumption of present goods could also eventually appear if and when savers start leveraging their consumption through low-rate mortgages, as house prices seem to keep increasing. In the long-run, SMEs’ investments aren’t sufficient to satisfy economic agents’ future demand of consumer goods.

With leverage increasing and the economy producing beyond its PPF, the situation is unsustainable. As increasingly more people pile in real estate, demand for real estate loanable funds increases, pushing up the interest rate of the sector. Interest payments – which had taken an increasingly large share of disposable income in line with growing leverage – rise, putting pressure on households’ finances. The economy reaches a Minsky moment and real estate prices start coming down. Real estate developers, who had launched long-term housing projects tricked by the low rates, find out that these are malinvestments that either cannot find buyers or are lacking the financial resources to be completed. Bankruptcies increase among over-leveraged households and companies. Banks start experiencing losses, contract lending and money supply as a result, whereas savers’ demand for money increases. The economy is in monetary disequilibrium. Welcome to the financial crisis designed in the Swiss city of Basel.

This all remains very theoretical and I’ll try to dig up some empirical evidences in another post. Nonetheless, the story seems to match relatively well what happened in some countries during the crisis. Soon after Basel regulations were implemented, household leverage in Spain or Ireland took off and came along with increasing house prices and retail sales, which both collapsed once the crisis struck. Under this framework, the artificially restricted supply of loanable funds to SME and the consequent reduction in long-term investments could also partly explain the rich world manufacturing problems. However, I presented a very simple template. As I mentioned in a previous post, securitisation and other banking regulations (liquidity…) blur the whole picture, and central banks can remain the primary channel through which interest rates are distorted.