NESTA, a UK-based charity promoting innovation (and which also organised the annual UK Barcamp Bank), just released its new report on alternative finance trends in the UK. It is a goldmine. The report if full of interesting charts and figures and in many ways tells us a lot about the current state of our traditional financial sector (and possibly of the stance of monetary policy).

Some charts and comments are of particular interest. To my surprise, business lending through P2P platforms was the biggest provider of funds in terms of total amount: 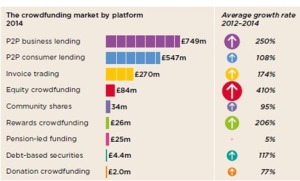 According to the report:

Given bank regulation that penalises banks for lending to small firms, none of this is surprising. As I keep saying, regulation is the primary driver of financial innovation. P2P business lending owes a lot to regulators… until it gets regulated itself?

Another very interesting chart was the following one: 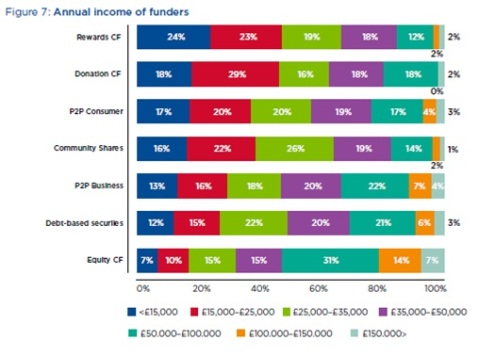 This is crazy. Wealthy people pretty much shun P2P and other alternative finance forms. Why is that? Here’s my theory: wealthy people are usually well advised financially and have access to more investment opportunities than less-wealthy household. Consequently, a low interest environment isn’t that much of a problem (in the short-term): they have the ability to move down the risk scale to look for extra yield. On the other hand, household with more ‘moderate’ incomes do not have access to such investment opportunities: they are the ones hit by low returns on investments. P2P provides them with a unique opportunity to boost the meagre returns on their savings as long as real interest rates remain that low (i.e. lower than inflation):

[The funders] in P2P lending and equity-based crowdfunding were primarily driven by the prospect of financial returns with less concern for backing local businesses or supporting social causes.

Those figures are both worrying and encouraging. Worrying because the harm that low interest rates and regulation seem to have on the economy and the traditional banking sector. Encouraging because finance is reorganising itself to respond to both borrowers’ and lenders’ demands. This is spontaneous order at work. Let just hope this does not add another layer of complexity and opacity to our already overly-complex financial system.