Is the universe about to make a switch to antimatter? Interest rates in negative territory is the new normal. Among regions that introduced negative rates, most have only put them in place on deposit at the central bank (like the -0.2% at the ECB for instance). Sweden’s Riksbank is innovating with both deposit and repo rates in negative territory. It now both has to pay banks that borrow from it overnight and… charge commercial banks that deposit money with it, like a mirror image of the world we used to know. However, like antimatter and matter and the so-called CP violation (which describes why antimatter has pretty much disappeared from the universe), positive rates used to dominate the world. Until today. 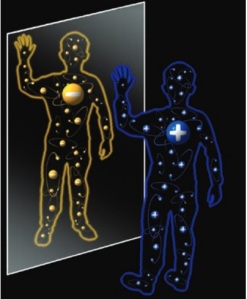 Many of those monetary policy decisions seem to be taken in a vacuum: nobody seems to care that the banking regulation boom is not fully conductive to making the banking channel of monetary policy work (and bankers are attempting to point it out, but to no avail). In some countries, those decisions also seem to be based on the now heavily-criticised inflation target, as CPI inflation is low and central bankers try to avoid (whatever sort of) deflation like the plague.

As I described last year with German banks, negative rates have….negative effects on banks: it further amplifies the margin compression that banks already experience when interest rates are low by adding to their cost base, and destabilise banks’ funding structure by providing depositors a reason to withdraw, or transfer, their deposits. Some banks are now trying to charge some of their largest, or wealthiest, customers to offset that cost. At the end of the day, negative rates seem to slightly tighten monetary policy, as the central bank effectively removes cash from the system.

It is why I was delighted to read the below paragraphs in the Economist last week, a point that I have made numerous times (and also a point that many economists seem not to understand):

In fact, the downward march of nominal rates may actually impede lending. Some financial institutions must pay a fixed rate of interest on their liabilities even as the return on their assets shrivels. The Bank of England has expressed concerns about the effect of low interest rates on building societies, a type of mutually owned bank that is especially dependent on deposits. That makes it hard to reduce deposit rates below zero. But they have assets, like mortgages, with interest payments contractually linked to the central bank’s policy rate. Money-market funds, which invest in short-term debt, face similar problems, since they operate under rules that make it difficult to pay negative returns to investors. Weakened financial institutions, in turn, are not good at stoking economic growth.

Other worries are more practical. Some Danish financial firms have discovered that their computer systems literally cannot cope with negative rates, and have had to be reprogrammed. The tax code also assumes that rates are always positive.

In theory, most banks could weather negative rates by passing the costs on to their customers in some way. But in a competitive market, increasing fees is tricky. Danske Bank, Denmark’s biggest, is only charging negative rates to a small fraction of its biggest business clients. For the most part Danish banks seem to have decided to absorb the cost.

Small wonder, then, that negative rates do not seem to have achieved much. The outstanding stock of loans to non-financial companies in the euro zone fell by 0.5% in the six months after the ECB imposed negative rates. In Denmark, too, both the stock of loans and the average interest rate is little changed, according to data from Nordea, a bank. The only consolation is that the charges central banks levy on reserves are still relatively modest: by one estimate, Denmark’s negative rates, which were first imposed in 2012, have cost banks just 0.005% of their assets.

Additionally, a number of sovereign, and even corporate, bonds yields have fallen (sometimes just briefly) into negative territory, alarming many financial commentators and investors. The causes are unclear, but my guess is that what we are seeing is the combination of unconventional monetary policies (QE and negative rates) and artificially boosted demand due to banking regulation (and there is now some evidence for this view as Bloomberg reports that US banks now hoard $2Tr of low-risk bonds). Some others report that supply is also likely to shrink over the next few years, amplifying the movement. There are a few reasons why investors could still invest in such negative-yielding bonds however.

As Gavyn Davies points out, we are now more in unknown than in negative territory. Nobody really knows how low rates can drop and what happens as monetary policy (and, I should add, regulation) pushes the boundaries of economic theory. At what point, and when, will economic actors start reacting by inventing innovative low-cost ways to store cash? The convenience yield of holding cash in a bank account seems to be lower than previously estimated, although it is for now hard to precisely estimate it as only a tiny share of the population and corporations is subject to negative rates (banks absorb the rest of the cost). The real test for negative rates will occur once everyone is affected.

Free markets though can’t be held responsible for what we are witnessing today. As George Selgin rightly wrote in his post ‘We are all free banking theories now’, what we currently experience and the options we could possibly pick have to measure up against what would happen in a free banking framework.

Coincidentally, a while ago, JP Koning wrote a post attempting to describe how a free banking system could adapt to a negative interest rates environment. He argued that commercial banks faced with negative lending rates would have a few options to deal with the zero lower bound on deposit rates. He came up with three potential strategies (I’ll let you read his post for further details): remove cash from circulation by implementing ‘call’ features, cease conversion into base money, and penalize cash by imposing through various possible means what is effectively a negative interest rate on cash. I believe that, while his strategies sound possible in theory, it remains to be seen how easy they are to implement in practice, for the very reason that the Economist explains above: competitive forces.

But, more fundamentally, I think his assumptions are the main issue here. First, the historical track record seems to demonstrate that free banking systems are more stable and dampen economic and financial fluctuations. Consequently, a massive economic downturn would be unlikely to occur, possibly unless caused by a massive negative supply shock. Even then, the results in such economic system could be short-term inflation, maintaining nominal (if not real) interest rates in positive territory.

Second (and let’s leave my previous point aside), why would free banks lend at negative rates in the first place? This doesn’t seem to have ever happened in history (and surely pre-industrial rates of economic growth were not higher than they are now, i.e. ‘secular stagnation’) and runs counter to a number of theories of the rate of interest (time preference, liquidity preference, marginal productivity of capital, and their combinations). JPK’s (and many others’) reasoning that depositors wouldn’t accept to hold negative-yielding deposits for very long similarly applies to commercial banks’ lending.

Why would a bank drop its lending rate below zero? In the unrealistic case of a bank that does not have a legacy loan book, bankers would be faced by two options: lend the money at negative rates, during an economic crisis with all its associated heightened credit and liquidity risk, or keep all this zero-yielding cash on its balance sheet and make a loss equivalent to its operating costs. If a free bank is uncertain to be able to lower deposit rates below lending rates, better hold cash, make a loss for a little while, the time the economic crisis passes, and then increase rates again. This also makes sense in terms of competitive landscape. A bank that, unlike its competitors, decides to take a short-term loss without penalising the holders of its liabilities is likely to gain market shares in the bank notes (and deposits) market.

Now, in reality, banks do have a legacy loan book (i.e. ‘back book’) before the crisis strike, a share of which being denominated at fixed, positive, nominal interest rates. Unless all customers default, those loans will naturally shield the bank from having to take measures to lower lending rates. The bank could merely sit on its back book, generating positive interest income, and not reinvest the cash it gets from loan repayments. Profits would be low, if not negative, but it’s not the end of the world and would allow banks to support their brand and market share for the longer run*.

Finally, the very idea that lending rates (on new lending, i.e. ‘front book’) could be negative doesn’t seem to make sense. Even if we accept that the risk-free natural rate of interest could turn negative, once all customer-relevant premia are added (credit and liquidity**), the effective risk-adjusted lending rate is likely to be above the zero bound anyway. As the economic crisis strikes, commercial banks will naturally tend to increase those premia for all customers, even the least risky ones. Consequently, a bank that lent to a low-risk customer at 2% before the crisis, could well still lend to this same customer at 2% during the crisis (if not higher), despite the (supposed) fall of the risk-free natural rate.

I conclude that it is unlikely that a free banking system would ever have to push lending (or even deposit) rates in negative territories, and that this voodoo economics remains a creature of our central banking system.

*Refinancing remains an option for borrowers though. However, in crisis times, it’s likely that only the most creditworthy borrowers would be likely to refinance at reasonable rates (which, as described above, could indeed remain above zero)

**Remember this interest rate equation that I introduced in a very recent post: