Ben Southwood and I agree on most things but a few topics. Whether central banks’ decisions affect interest rates is one of those, though I do think we have more common than we’re willing to admit. Here are the various reasons that convince me that central banks exert a relatively strong influence on most market rates.

On ASI’s blog, Ben wrote a piece about a 2013 research paper from Fama, who looked into interest rate time series to determine whether or not the Fed controlled interest rates. According to Ben’s own interpretation of the paper, the answer is ‘probably not’. Ironically, my take is completely different.

Throughout most of his paper, Fama’s results do indicate that the Fed exercises a relatively firm grip on all sorts of interest rates, as he admits it himself many times. For example, in his conclusion he writes:

A good way to test for Fed effects on open market interest rates is to examine the responses of rates to unexpected changes in the Fed’s target rate. Table 5 confirms that short-term rates (the one month commercial paper rate and three-month and six-month Treasury bill rates), respond to the unexpected part of changes in TF. Table 5 is the best evidence of Fed influence on rates, and event studies of this sort are center stage in the active Fed literature.

But I find Fama a little biased as he always tries to defend his original position that the Fed does not exert such a strong control:

The Table 4 evidence that short-term interest rates forecast changes in the Fed funds target rate is not news (Hamilton and Jorda 2002). For those who believe in a powerful Fed, the driving force is TF, the concrete expression of Fed interest rate policy, and the forecast power of short rates simply says that rates adjust in advance to predictable changes in the Fed’s target rate. (See, for example, Taylor 2001.) The evidence is, however, also quite consistent with a passive Fed that changes TF in response to open market interest rates. There are, of course, scenarios in which both forces are at work, possibly to different extents at different times. The Fed may go passive and let the market dictate changes in TF when inflation and real activity are satisfactory, but turn active when it is dissatisfied with the path of inflation or real activity. This mixed story is also consistent with the evidence in Table 3 that the Fed funds rate moves toward both the open market commercial paper rate and the Fed’s target rate.

However Fama never explains why the Fed would simply passively change its base rate in response to private markets. This seems to defeat the purpose of having an active monetary policy.

In short, most of the evidences that Fama finds seem to demonstrate that the Fed indeed does control most interest rates to an extent (in particular short-term ones). But he does not seem to accept his own result and tries to come up with alternative explanations that are less than convincing, to say the least. He concludes by basically saying that…we cannot come to a conclusion.

But Fama’s paper suffers from a major flaw. Let’s break down a market interest rate here:

Fama’s dataset wrongly runs regressions between Fed’s base rate movements and observable market yields on some securities. The rate that the Fed influences is the risk free rate (RFR). But as seen above, market rates contain a number of premia that vary with economic conditions and the type of security/lending and on which the Fed has limited control.

For instance, when a crisis strikes, the credit risk premium is likely to jump. In response, the Fed is likely to cut its base rate, meaning the RFR declines. But the observable rate does not necessarily follow the Fed movement. It all depends on the amplitude of the variation in each variable of the equation above. Hence the correlation will only provide adequate results if the economic conditions are stable, with no expected change in inflation or credit risk. Does this imply that the Fed has no control over the interest rate? Surely not, as the RFR it defines is factored in all other rates. In the example above, the market rates ends up lower than it would have normally been if fully set by private markets.

David Beckworth had a couple of interesting charts on its blog, which attempted to strip out premia from the 10-year Treasury yield (it’s not fully accurate but better than nothing):

Now compare the 1990-2014 non-adjusted and adjusted 10-year Treasury yield with the evolution of the Fed base rate below:

(the same reasoning applies to commercial paper spread, though the inflation premium is close to nil in such case)

Second, I find it hard to understand Ben’s point that markets set rates, when central banks’ role is indeed to define monetary policies and, by definition, impact those market rates. If only markets set rates, then surely it is completely pointless to have central banks that attempt to control monetary policies through various tools, including the control on the quantity of high-powered money. In a simple loanable funds model (let’s leave aside the banking transmission mechanism), in which the interest rate is defined by the equilibrium point between supply and demand for loanable funds, it is quite obvious that a central bank injecting, or removing, base money from the system (that is, pushing the supply curve one way or another) will affect the equilibrium rate. Of course the central bank does not control the demand curve. But the fact that the bank does not have a total control over the interest rate does not imply that it has none and that its policies have no effect. What does count is that the resulting equilibrium rate differs from the outcome that free markets would have produced. 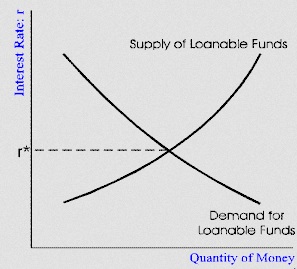 I am also trying to get my head around what I perceive as a contradiction here (I might be wrong). Market monetarists (of whom Ben seems to belong) believe that money has been ‘tight’ throughout the recession due to central banks’ misguided monetary policies. They seem to think that rates would have dropped much faster in a free market. This seems to demonstrate that market monetarist believe in the strong influence of central banks on many rates. But according to Ben, central banks do not have much influence on rates. Does he imply that free markets were responsible for the ‘tight’ policy that followed the crisis?

So far in this post we’ve only seen cases in which the central bank indirectly affects market rates. But some markets are linked to the central bank base rate from inception. For instance, in the UK, most mortgage rates (‘standard variable rates’) are explicitly and contractually defined as ‘BoE Base Rate + Margin’**. The margin rarely changes after the contract has been agreed. Any change in the BoE rate ends up being automatically reflected in the rate borrowers have to pay (that is, before banks are all forced to widen the contract margin because of the margin compression phenomenon, as I described in my previous exchange with Ben here and here). The only effect of banking competition is to lead to fluctuations of a few bp up or down on newly originated mortgages (i.e. one bank offers you BoE + 1.5% and another one BoE + 1.3%).

At the end of the day, I have the impression that a part of our disagreement is merely due to semantics. I don’t think anybody has declared that central banks fully control rates. This would be foolish. But they certainly exert a strong influence (at least) through the risk-free rate, and this reflects on all other rates across maturities and risk profiles.

*To be fair, it does look like some of the Fed’s decisions were anticipated by markets and reflected in Treasury yields just before the target rate was changed.

**In some other countries the link is looser, as the central bank rate is replaced by the local interbank lending rate (Libor, Euribor…).