Are we all macroprudentialists now?

Update: a revised and extended version of this post was published on Alt-M here

The title of this post (and a reference to Milton Friedman’s famous quote) is also the headline of a recent speech by Klaas Knot, President of the Netherlands Bank, and to which he answers:

In the spirit of Pentti’s thinking my answer is:  Yes – as long as we stay eclectic, pragmatic and flexible. And we take the interactions of monetary and macroprudential policies into account, and coordinate the two policies.

While there is some truth to the second half of his answer – that monetary and macropru do interact, I find myself very uncomfortable with its first half: if we are all macroprudentialists now, we are heading for disaster.

As highlighted on this blog a number of times:

But as research pieces presented last September at the BIS/Central Bank of Turkey seminar on macroprudential regulation demonstrate, group think is widespread: economic researchers include many, many important and explicit caveits and limitations within the core text of their papers; yet seem to suddenly ‘forget’ them once it is time to write both the abstract and the conclusion of the same papers.

Out of 19 papers, only one refers to some of the issues listed above and questions some the fundamentals behind macropru reasoning (Bálint Horváth and Wolf Wagner’s Macroprudential policies and the Lucas Critique, an interesting read). Many others, on the other hand, question the very fundamentals of a market economy: each agent fails to ‘internalise’ the damages that his/her actions have on the market and economy as a whole. Therefore, an external regulator needs to intervene in order to control the agent’s actions and stabilise the overall economy.

This is absurd. The same reasoning could be applied to any good: an agent overproducing a certain good fails to ‘internalise’ the damages it causes to the market and his industry. As a result, this industry needs a central planner to organise it in the most efficient way. We know the fallacy of this logic: government failures are worse and more systematic than market failures. Yet this view prevails in today’s macropru theoretical foundations.

This makes me think that Knot’s speech is an example of moderation in today’s central bank school of thought. Take this recent speech by Alex Brazier, Executive Director for Financial Stability Strategy at the BoE, during a financial regulation seminar at the London School of Economics. It is quite remarkable in the way that it manages to avoid referring to any of the issues listed above (and even contradicts point 2 despite the evidence), depicts macropru as an almost ideal framework, and exemplifies central bankers’ fundamental distrust in free markets.

See this statement for instance:

It’s well known, for example, that banks would choose to have too little capacity to absorb losses – too little equity capital – because their current shareholders don’t bear the full economic costs of their failure or distress.  The economy needs better capitalised banks than the free market would deliver.

“Well known”? This makes little sense. This statement is a negation of all historical experiences of stable financial systems during which there was no regulator in place dictating capital requirements.

More perplexing are his later statements about capital buffers:

The results have been transformative.  A system that could absorb losses of only 4% of (risk weighted) assets before the crisis now has equity of 13.5% and is on track to have overall loss absorbing capacity of around 28%.

This is wrong. As we recently saw, banks had regulatory Tier 1 ratios of 8 to 9% before the crisis. Not 4%, which was the regulatory minima. Mr Brazier is therefore comparing the pre-crisis regulatory minima to bank’s current average capital buffer.

More surprisingly, Brazier’s speech includes a whole part attempting to convince us that “clairvoyance is not a reasonable standard to be held to”, and that “[regulators’] mandate is to break free of the shackles of forecasting, to free us from trying to predict if the economy will turn down, and to apply economic analysis to the question of how bad it could be if it did.”

Macroprudential tools are discretionary policies that are supposed to be applied in a countercyclical manner: they are set in such a way to specifically reflect regulators’ forecasts (or beliefs) about where the economy – or certain segments of the economy – is going. Therefore, how on Earth is macropru supposed to work if regulators do not even attempt to understand how the economy is evolving or where the imbalances are building up in the first place? This is all very confusing.

And this is the issue. It is bewildering to see some economists, and virtually the whole central banking and bank regulatory profession, tell us that, despite all its shortcomings, unknowns, internal contradictions and inherent risks and distortions, macroprudential regulation is the way forward. (and to make things worse, macropru tools are not new and have been used for a while now, especially by emerging markets, with limited effectiveness – see chart below, taken from one of the seminar papers) 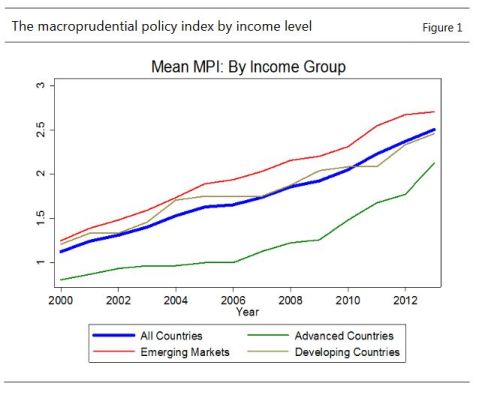 I know we apparently now live in an ‘alternative facts’ world, but academia is supposed to focus on evidence. The amount of research attempting to find a way to control the economy and financial markets through discretionary fluctuations of macroprudential tools is reminiscent of the post-WW2 Keynesian push which, as we know, didn’t end well.

Milton Friedman would have certainly not taught his students that “we are all macroprudentialists now”.

PS: thankfully Kevin Dowd is also supposed to speak at this seminar later this year, which should dispel some of the myths that are being spread