Two brand new pieces of academic research have been published last month, directly or indirectly related to the Austrian theory of the business cycle (some readers might already know my RWA-based ABCT: here, here, here and here).

The first one, called Roundaboutness is Not a Mysterious Concept: A Financial Application to Capital Theory (Cachanosky and Lewin) attempts to start merging ABCT (or rather, Austrian capital theory) with corporate finance theory. The authors use the finance concepts of economic value added (EVA), modified duration, Macaulay duration and convexity in order to represent the Austrian concepts of ‘roundaboutness’ and ‘average period of production’. The paper provides a welcome and well-defined corporate finance background to the ABCT.

However, finance practitioners still don’t have the option to use a ‘full-Austrian’ alternative financial framework, as this paper still relies on some mainstream concepts. For instance, the EVA calculation for a given period t is as follows:

where ROIC is the return on invested capital, WACC the weighted average cost of capital and K the financial capital invested.

In order to compute the project’s market value added (MVA, i.e. whether or not the project has added value), it is then necessary to discount the expected future EVAs of each period t1, t2…, T, by the WACC of the project:

The WACC represents the minimum return demanded by investors to compensate for the risk of such a project (i.e. the opportunity cost), and is dependent on the interest rate level. The problem arises in the way it is calculated in modern mainstream finance. While the cost of debt capital is relatively straightforward to extract, the cost of equity capital is commonly computed using the capital asset pricing model (CAPM). Unfortunately, the CAPM is based on the Modern Portfolio Theory, itself based on new-classical economics and rational expectations/efficient market hypothesis premises, which are at odds with Austrian approaches.

(And I am not even mentioning some of the very dubious assumptions of the theory, such as “all investors can lend and borrow unlimited amounts at the risk-free rate of interest”…)

While it is easy for researchers to define a cost of equity for a theoretical paper, practitioners do need a method to estimate it from real life data. This is how the CAPM comes in handy, whereas the Austrian approach still has no real alternative to suggest (as far as I know).

Nevertheless, putting the cost of equity problem aside, the authors view the MVA as perfectly adapted to capital theory:

Note that the MVA representation captures the desired characteristics of capital-theory; (1) it is forward looking, (2) it focuses on the length of the EVA cash-flow, and (3) it captures the notion of capital-intensity.

Using the corporate finance framework outlined above, the authors easily show that the more capital intensive investments are the more they are sensitive to variations in interest rates (i.e. they have a larger ‘convexity’). They also show that more ‘roundabout’/longer projects benefit proportionally more from a decline in interest rates than shorter projects. Unsurprisingly, those projects are also the first ones to suffer when interest rates start going up. 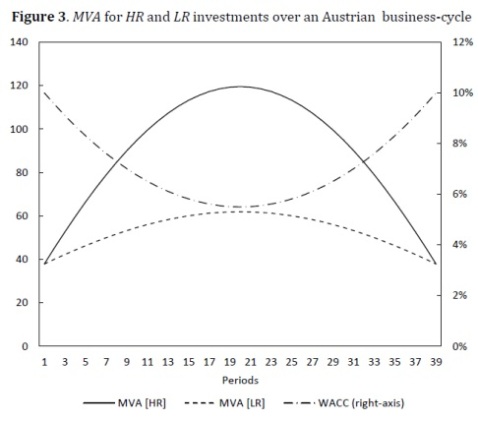 Overall, this is a very interesting paper that contains a lot more than what I just described. I wish more research was undertaken on that topic though.

The second paper, pointed by Tyler Cowen, while not directly related to the ABCT, nonetheless has several links to it (I am unsure why Cowen thinks this piece of research actually reflects the ABCT). What’s interesting in this paper is that it seems to confirm the link between credit expansion, financial instability and banks stock prices, as well as the ‘irrationality’ of bank shareholders, who do not demand a higher equity premium when credit expansion occurs (which doesn’t seem to fit the rational expectations framework very well…).

6 responses to “New research on finance and Austrian capital theories”