Raising capital requirements? Not that useful

The recent news of the near-bankruptcy of UK-based Cooperative Bank and Portugal-based Banco Espirito Santo made me question the utility of regulatory capital requirements. What are they for? Is raising them actually that useful? It looks to me that the current conventional view of minimum capital requirements is flawed.

In the pre-crisis era, banks were required to comply with a minimum Tier 1 capital ratio of 4% (i.e. Tier 1 capital/risk-weighted assets >= 4%). Most banks boasted ratios of 2 to 5 percentage points above that level. Basel 3 decided to increase the Tier 1 minimum to 6%, and banks are currently harshly judged if they do not maintain at least a 4% buffer above that level. 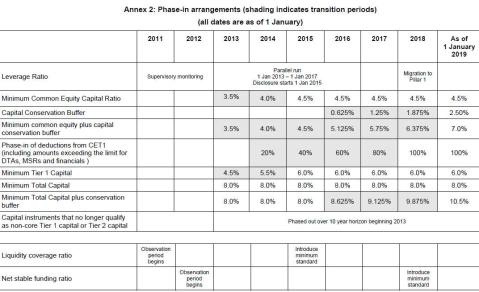 Indeed, given the possible sanctions arising from breaching those capital requirements, bankers usually thrive to maintain a healthy enough buffer above the required minimum. Sanctions for breaching those requirements include in most countries: revoking the banking licence, forcing the bank into a state of bankruptcy and/or forcing a restructuring/break-up/deleveraging of the balance sheet. Hence the question: what is the actual effective capital ratio of the banking system?

Companies – as well as banks in the past – are usually deemed insolvent (or bankrupt) once their equity reaches negative territory. At that point, selling all the assets of the company/bank would not generate enough money to pay off all creditors (while shareholders are wiped out).

For sure, higher minimum requirements have one advantage: depositors are less likely to experience losses. The larger the equity buffer, the stronger the protection.

However, there are also several significant disadvantages.

Regulatory insolvency events also cause operational problems. Espirito Santo was declared insolvent by its regulators but… not by the ISDA association! Setting regulatory minimums at 5% or 25% would have no impact on the issues listed above, as long as this logic is applied. To make regulatory requirements more effective, sanctions in case of breach should be minimal or non-existent in the short-term but should kick in in the long-term if banks’ capitalisation remains too low after a given period of time.

Regulatory minimums exemplify what Bagehot already tried to warn against already at his time: they are bound to create unnecessary panics. Speaking of liquidity reserves (the same reasoning as above applies), he said in Lombard Street:

[Minimums are bad] when legally and compulsorily imposed. In a sensitive state of the English money market the near approach to the legal limit of reserve would be a sure incentive to panic; if one-third were fixed by law, the moment the banks were close to one-third, alarm would begin, and would run like magic. And the fear would be worse because it would not be unfounded—at least, not wholly. If you say that the Bank shall always hold one-third of its liabilities as a reserve, you say in fact that this one-third shall always be useless, for out of it the Bank cannot make advances, cannot give extra help, cannot do what we have seen the holders of the ultimate reserve ought to do and must do.

* ‘virtually’ as, as described above, depositors protection is nonetheless enhanced, though even this is arguable given what happened in Cyprus

8 responses to “Raising capital requirements? Not that useful”