Paul Volcker famously said that the only meaningful financial innovation of the past decades was the ATM. Not only do I believe that his comment was strongly misguided, but he also seemed to misunderstand the very essence of innovation in the financial services sector.

Financial innovations are essentially driven by:

I usually view regulatory-driven innovations as the ‘bad’ ones. Those are the ones that add extra layers of complexity and opacity to the financial system, hiding risks and misleading investors in the process.

It took a little while, but financial innovations are currently catching up with the IT revolution. Expect to change the way you make or receive payments or even invest in the near future.

See below some of the examples of financial innovation in recent news. Can you spot the one(s) that is(are) the most likely to lead to a crisis, and its underlying driver?

Of course, a lot more is going on in the financial innovation area at the moment, and I only highlighted the most recent news. Identifying the regulatory arbitrage-driven innovations will help us find out where the next crisis is most likely to appear.

PS: the growth of cashless IT wallets has interesting repercussions on banks’ liquidity management and ability to extend credit (endogenous inside money creation), by reducing the drain of physical cash on the whole banking system’s reserves (outside money). If African economies are any guide to the future (see below, from The Economist), cash will progressively disappear from circulation without governments even outlawing it. 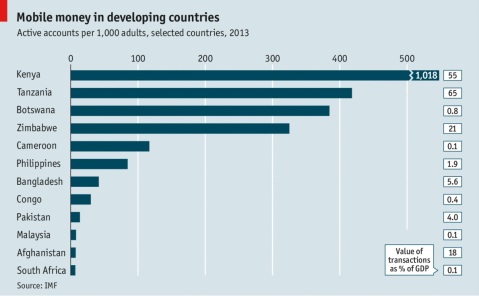