Basel vs. ECB’s TLTRO: The fight

Following my previous post on the mechanics of ECB negative deposit rates, I wanted to back my claims about the likely poor effect of the central bank TLTRO measure on lending.

I argued that despite the cheap funds provided by the ECB to lend to corporate clients (particularly SMEs), Basel’s risk-weighted assets would stand in the way of the scheme as they keep distorting banks’ lending incentives (same is true regarding the BoE and the second version of its Funding for Lending Scheme).

I extracted all the most recent new business and mortgage lending rates from the central banks’ websites of several European countries. Unfortunately, business lending rates are most of the time aggregates of rates charged to large multinational companies, SMEs, and micro-enterprises. Only the Banque of France seemed to provide a breakdown. So most business lending rates below are slightly skewed downward (but not by much as you can see with the French case). 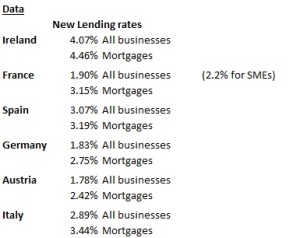 Using this dataset, I built a similar scenario to the one I described in my first RWAs and malinvestments post (as it turned out, I massively overestimated business lending rates in that post…). I wanted to find out what would be the most profitable option for a bank: business lending or mortgage lending, given RWA and capital constraints (banks target a 10% regulatory Tier 1 capital ratio). The results speak for themselves:

Despite the cheap ECB loans, and given a fixed amount of capital, banks are way more profitable raising funding from traditional sources to lend to households for house purchase purposes…

Admittedly, the exercise isn’t perfect. But the difference in net interest income and return on capital is so huge that tweaking it a little wouldn’t change much the results:

In the end, even if the adjustments described above reduce the profitability spread by 10 percentage points, the conclusion stands: banks are hugely incentivised to avoid business lending, facilitating misallocation of capital on a massive scale, in particular in a period of raising capital requirements… Moreover, banks also benefit from favourable RWAs for securitised products based on mortgages (CMBS, RMBS…), compounding the effects.

To tell you the truth, I wasn’t expecting such frightening results when I started writing that post… Please someone tell me that I made a mistake somewhere…

Central banks, regulators and politicians will find it hard to prop up business lending with regulations designed to prevent it.

7 responses to “Basel vs. ECB’s TLTRO: The fight”